Below you can browse the latest and archived Botanicoir news, events and press releases. Read through our product advances, growing innovations and industry developments.

In control with coir

It’s 15 years since Botanicoir began working with tomato growers to develop what was then a relatively new substrate for the crop. We talk to two early adopters about how it has evolved to meet the demands of today’s production systems and the qualities they most value.

Switching from one supplier of a basic substrate to another can take some getting used to for any horticultural business. For growers of long-season, high-value crops such as tomatoes, changing the type you use altogether is a decision of quite a different order.

Stone wool slabs were for decades the only choice for much of the industry. But about 15 years ago, in response to a request from one of his supermarket customers, Andy Roe, production manager for Flavourfresh Salads’ three tomato nurseries around Merseyside, began the search for an alternative. It had to be easily recycled, have a lower carbon footprint and do the job as well as stone wool.

At the time, coir was beginning to make an important contribution as an ingredient to substitute for peat in growing media for ornamental crops, but few would have thought it had a place in tomato production. “We ran trials with coir, as well as some other materials, but initially couldn’t find one with the quality and consistency we needed,” says Mr Roe.

Coir supplier Botanicoir was just starting up in the UK at the time and provided Flavourfresh with some growbags to try out. “Even in that first year, we were getting results similar to the rest of our crop, so it dovetailed perfectly,” he says.

For the hydroponic crop it’s all about moisture control ¬– get that wrong at the start and it can take months to bring plants back on track. “In coir, that’s down to the way the fibres create a capillary action,” says Mr Roe. “Too many fine particles in the blend make it too wet but too high a proportion of the larger particles means it’s too dry, there’s nothing to hold the water. Getting that mix tailored for the crop is what gives you the ability to hold the water content you need during the day yet dry down quickly for overnight.”

There were issues early on, though, including with chloride levels which naturally accumulate in and on the coconut husks from which coir is derived, but these were quickly addressed. “We were having to modify our irrigation strategy to cope but I was impressed by how quickly Botanicoir, then still relatively new to the crop, worked out how to eliminate the problem,” he says. “They also brought in a specialist adviser from the Netherlands to guide us and the other growers who were looking to switch to coir.

“Over the first few years of trials it was easy to see – with the same varieties, in the same greenhouses, with the same growing strategy – we were consistently achieving better yields, quality and flavour.”

Now, 95% of Flavourfresh’s tomato production is on Botanicoir. “The only thing stopping it being 100% is one variety we grow that we’re working on with the company to get the flavour we’re looking for,” he says. 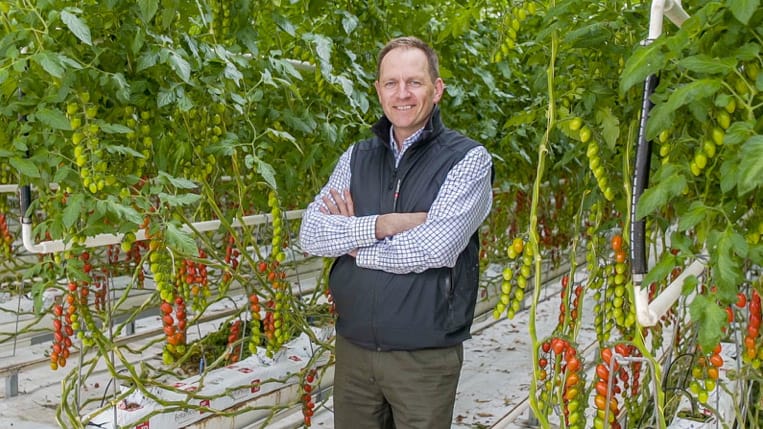 One of the reasons why APS Produce’s 26ha nursery on the Isle of Wight moved over to coir was what happens to the substrate at the end of the crop. “We have around 6ha of organic production; we can compost the coir and use it in our organic soils,” says the nursery’s head of agronomy, Paul Howlett.

“The only option for disposing of stone wool on the island is sending to landfill so being able to recycle the coir is better for us commercially and for the environment.”

He, too, had initial concerns over sourcing a coir of consistent quality. “It’s a natural product,” he says. “Some we tried were too variable, with different wetting and drying characteristics in different bags sourced from the same supplier. As well as supplying a consistent product, we felt Botanicoir had the right level of interest in what we were doing and support for our trials.”

The two growers use slightly different Botanicoir blends. Mr Howlett works with Breeze XD, which, when fully wetted, holds 30.5% air and 51% water. With its inclusion of a high proportion of the larger particle sizes, he finds it ‘can’t be overwatered’.

“Getting a good root system is crucial,” he says. “Obviously that depends on the air to water balance in the slab and being able to dry down and rewet evenly and controllably – and that is determined by the blend of coir components.”

The crops at Flavourfresh are grown on a ‘drier’ substrate, Dry XD, which has an air content of 32.5% and water content of 48%. “We previously used Botanicoir Dry,” says Mr Roe. “I find the blend we use now particularly easy to rewet evenly after it’s dried down; that gives us a lot of confidence against, for example, having a fault in the irrigation delivery.” 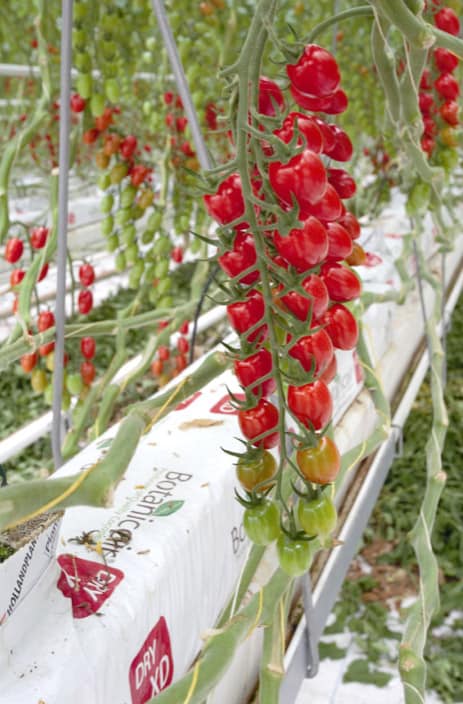 He believes it has helped with botrytis management, too. “We are seeing botrytis at maybe just 5% of what we used to and although we have no trials evidence I’m sure the substrate is contributing.”

Mr Roe has recently been working with the company to see if there is any advantage to incorporating woodchip in the blend. “We knew from earlier trials that woodchip brings some microbial activity,” he says. “In turn, that seemed to give us better plants with darker foliage, more generative growth and some yield gains.”

Trial bags produced for him were tested coincidentally at the same time as the nursery was trying different ways to manage root mat. “We ended up with no root mat in the crop growing in the coir with added woodchip,” he says. “Our water is recirculated so we were even more interested to see that we also failed to establish root mat in the adjacent trial on the standard coir.

“It needs more investigation but I suspect it’s the biological activity from the woodchip that’s having an effect. If so, it’s amazing that it seemed to protect not just the plants in those bags but, via the water, the whole block. We seem to have rid ourselves of root mat.”

Since the trial he’s asked Botanicoir to make the woodchip blend as Flavourfresh’s main commercial substrate – and it’s even been given the name of G’Roe Bags.

Mr Howlett, meanwhile, was closely involved in the development of Botanicoir’s Grow Cubes for the young plants. “We wanted something we could use to grow a good plant to transfer direct onto the coir bags,” he says. “That air to water balance is just as critical for the young plant. We also worked with them to develop the ‘tea-bag’ material for the cover because it was important to us that it’s fully compostable.”

Confidence in a supplier is particularly important when you’re using a substrate that’s essentially derived from the byproduct of another crop but both growers have seen for themselves Botanicoir’s approach to production and quality control in Sri Lanka.

“We were confident from the start because of the level of support we were getting anyway,” says Mr Roe. “But it certainly helped to see the systems in place to clean, grade and test the product. There was a much higher degree of technology than I expected and the attention to detail in making the product as consistent as we need was quite humbling.”

Mr Howlett says he was especially interested in seeing what the working conditions were like in the factory.

“This is important not just to growers but for our supermarket customers,” he says. “So it’s good to be able to say we’ve seen the set-up for ourselves and are happy with it.”

While Andy Roe and Paul Howlett were among the first to explore coir as a tomato substrate, it has gained an increasing following in the past 15 years, both for the confidence it gives growers in steering the crop and for its ease of recycling at end of use – so much so that it’s now estimated to be at the root of some 35-40% of all substrate-grown tomatoes.

« Building loyalty by listening to growers
Growing Blueberries in Substrate »

We are a family run company with 15 years experience manufacturing quality coir products in Sri Lanka for the commercial horticultural industry. Our focus is and always will be providing top quality products and service to our customers around the world, whilst looking after the planet that we inhabit.